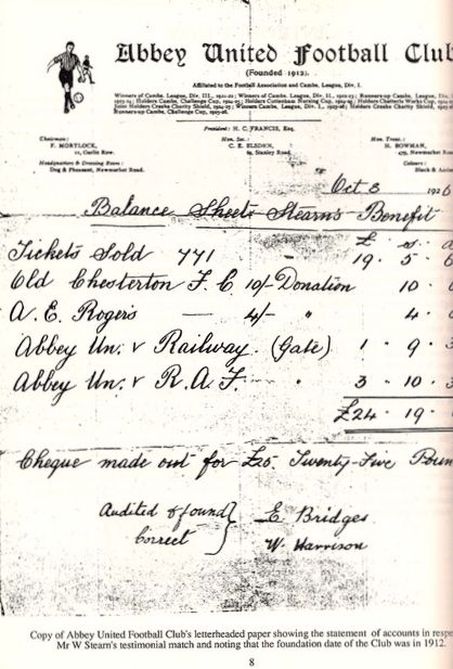 Abbey United headed paper, showing the club's foundation year as 1912.
Although a football club called Cambridge United was formed in 1910, this club was not connected in any way to the present Cambridge United. In fact, it only lasted four years before it amalgamated with Cambridge Town.

The Cambridge United we know and love today was formed in 1912 and was originally known as Abbey United. The club's formation and early existence was so poorly recorded that for many years it was believed that it was formed in 1919, shortly after the First World War. When Paul Daw, a former club secretary, was researching for his 1988 book United in Endeavour, he uncovered a copy of the club's balance sheet on headed paper (left), which states that the club was founded in 1912. Further research revealed that Abbey United was playing football in the 1913/14 season.

Abbey United's beginnings were so modest that no written records of meetings, or indeed matches, exist. This is hardly surprising, for it's believed that these early meetings were held under street lamps in Stanley Road.

The first known record of an Abbey United match can be found in the Cambridge Independent Press of Friday, 21 November 1913, which listed a match for the following day as a friendly fixture between Abbey United and MJ Drew's XI. Abbey lost the match 7-0. The first known match report appeared in the same newspaper two weeks later:

Abbey United is known to have played at least 19 matches that season, finishing with a record of won 11, drawn 1, lost 7; goals for 60, goals against 38.

The outbreak of the First World War in 1914 brought a sudden end to football. Although the Government didn't ban it, the football authorities agreed that it was in the best interests of the nation that all competitive football should close down until the war ended.

Soon after the end of the war, a number of Abbey Ward residents held a meeting to reform Abbey United. Reverend W Warr, Curate of the Abbey Church, was elected as Club President, Mr SJ Brown was elected Club Secretary and Mr RJ Wadsworth became a committee member, starting a long association with the club that would see him become a Director when the club became a limited company in 1953.

Perhaps this early link with Stourbridge Common gives  a clue as to how the club came to be associated with Coconuts. For over 700 years, a fair had been held on the Common and by the early 20th century coconut shies were very popular sideshows. Although the I've Got a Lovely Bunch of Coconuts song that we love today was still to be written, it only needs a little imagination to hear the showmen shouting about their 'lovely coconuts', which had only recently been introduced to Britain and were looked upon as being exotic.

The first season of the 1920s saw Abbey United play in a six-a-side competition at Littleport Football Club that attracted 1,350 spectators. Abbey won through to the quarter-final but could not claim their place because the players had to get back to Cambridge before the conclusion.

The 1921/22 season saw United play their first season of competitive football when they were accepted into Division Three of the Cambridgeshire Football League. Their first match, a 2-1 defeat of Abbey Crusaders on Stourbridge Common on Saturday, 27 August 1921, was followed by a 4-0 win at Cherry Hinton St Andrews on September 3. The following week they were at home to Chesterton Rovers and chalked up an amazing 12-0 victory, with Wally Wilson scoring five times. The season ended with Abbey United as champions, nine points clear of runners-up Burwell Rovers.

Local philanthropist Henry Clement Francis, a man with a special affection for the Abbey ward, became the club's President. The club's headquarters were at the Mission Hut in River Lane, and on matchdays the goalposts had to be carried along the riverside to the pitch on Stourbridge Common.
The 1922/23 season saw the team surpass the previous year's achievements by winning the Division Two Championship, dropping only three points in 22 matches. In winning 20 games, drawing one and losing one they scored an amazing 80 goals – most notched by Wally Wilson and Albert 'Twitter' Dring – and  conceded only 10. This was the season that a young Harvey Cornwell joined the club; he was to go on to become the club's longest-serving player before retiring in his late 50s. 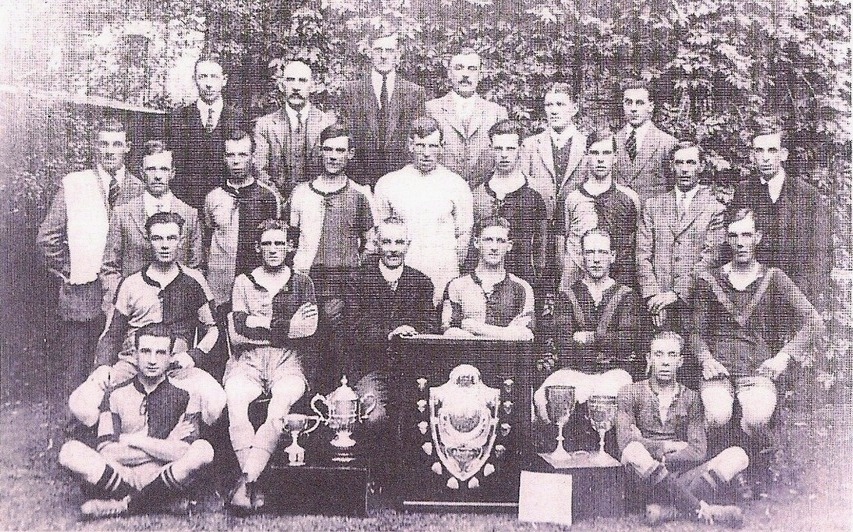